The DPVA Music Friend of the Year Award was once again presented at the Annual Meeting in June.  This year’s recipient is Gloria Pugh. 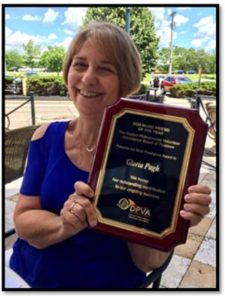 Gloria has worked closely with the Dayton Philharmonic Orchestra for nearly 40 years.  She began in the 1980s as a volunteer and docent.  Her talents and energy were soon tapped to serve as the DPVA board’s Education Coordinator.  Her involvement with and dedication to DPVA’s Orchestra and You program and the Young People’s Concert previews made her the perfect choice for the position as Education Director with the Dayton Philharmonic and the Dayton Performing Arts Alliance, which she held for over 24 years.

Gloria continues to work as a volunteer at DPVA fundraisers and the Show House as well as helping with training and encouraging docents in schools.  Her current service also includes serving as a DPVA board member.

Congratulations, Gloria, for your recognition as our Music Friend of the Year.  And thank you for so many years of continued service to the musical growth of students of the Miami Valley!