DPVA volunteers were once again on hand to assist Dayton area students who came to the Masonic Center for a performance by the Dayton Philharmonic Orchestra. Thousands of elementary-aged students are reached each year through the Magic Carpet and Young People’s Concerts, but it has been over ten years since the Dayton Philharmonic has performed a concert specifically for middle and high school students. Two concerts performed in January put an end to that hiatus. 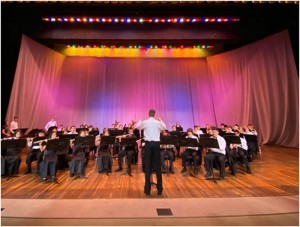 The Philharmonic gave two performances of the Middle and High School Concert “Music of War, Protest, and Revolution.” This concert focused on music written in response to social and historical events in four different centuries: a 16th century freedom movement, an 18th century job walkout, Napoleon and the War of 1812, and the 20th century Civil Rights movement.

On January 28, over 1,100 students from 18 different schools visited the Masonic Center for the first performance. . Mr. Brandon Barrometti directed Centerville High School band members as part of the morning’s performance, and a combined band of around 50 local band students performed alongside the Philharmonic for the finale of the concert, the 1812 Overture. Students in the combined band represented Dayton Public Schools, Troy Christian Schools, Franklin Schools, and Centerville Schools. 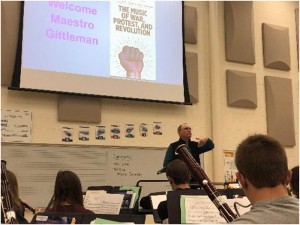 The following day, the Philharmonic performed in the new Kettering Fairmont High School Auditorium for over 900 of Kettering’s middle and high school music students. Students from Fairmont’s band program performed with the DPO for the 1812 Overture.

These two performances mark what we hope will be the beginning of a renewed tradition of Middle and High School Concerts! Thank you to the donors who helped make these performances possible: Mr. and Mrs. Raymond and Sue Merz, Ms. Anne F. Johnson, and the Kettering Education Foundation Endowment Fund.

The next Young People’s Concerts will take place in the Schuster Performing Arts Center on the morning of March 4. Conductors Neal Gittelman and Patrick Reynolds will lead the orchestra and students through a program titled European Influences. And high school students will once again be on stage at the Schuster Center on March 8 for the family concert series. The DPYO will perform “Musical World of Harry Potter” to a sold-out audience.

If you are interested in helping with either of these two performances, please contact Marcia Wood – note2mwood@donet.com – for details.